skip to main | skip to sidebar

The cruising adventures of Sid and Manuela

Hallelujah we are finally at a place with working Internet. We are so advanced on online stuff, that the 1% of people who are doing what we are doing are forgotten we are a dying breed. The more advance Internet gets the worse it is for us. I have had AOL for over 20 years and was able to do it offline, I sent my emails out whenever I had Internet via Flash Session. Now forget it, I have to be online with AOL to just access my address book. If I want to read my emails I have received already they are not on my computer I have to be online, commmmmmoooooon I don't have that luxury. I call it either extorsin or being taken hostage, neither one I like. This my dear family, friends and readers is our dilemma and it gets me soooo frustrated I don't even want to look at my computer anymore, hence my blog updates are suffering and you don't receive emails from us. Other than that life is just wonderful!!!
My other frustration, for the last 2 months I have been trying to find a program to convert my videos so Windows Movie Maker can read them. I must have downloaded 20 programs in the last 2 months that do that, or that replace Windows Movie Maker, all free downloads to find out well the down load is free but then when you work an hour or two on a movie and want to safe it they safe it 1/3 then they ask you to buy the program to save the other 2/3 of the movie. Well I have no Internet can't buy it. Anyway, that leads me back to my blog:

Wow what an exciting Panama Canal Transit we had. But before I post that I will post the last few months in Shelter Bay while I work on the Transit Blog

Remember the chaps we had paid for but never was ordered, a big Hallelujah, we finally received them 6 months later!!!

Definitely never a dull moment in the marina and I definitely kept busy between running Karaoke and Manuela’s Wings Night on Tuesdays and every Saturday playing at Open Mike which was always exciting especially whenever new victims arrived and were talked into playing. Vicky’s nature walks are always fun and each time we see Capuchin and howler monkeys, the last walk I went we saw lots of Trogons which are big beautifully colored birds. I finally know which bird sings these beautiful songs every morning and evening, the Trogon. Sunday night is always the fun BBQ potluck. These are the 3 events we were always looking forward to.

We also now and then we met for Happy Hour at the Restaurant. Unfortunately Juan the manager left us and the new manager was and is horrible has no clue how to the run the restaurant whatsoever, managed to run out of beer 3 times in 10 days. Then again and again. If it’s not beer he is out of wine and even rum!.

He stopped the Manuela wings, all cruisers were upset. The restaurant has been run so bad that we all boycotted the restaurant and moved the open mike to the palapa bring our own drinks and turns out we all liked it better there as it was breezy and the acoustics much, much better.

I notice my Don't worry Shit happens song never downloaded so here it is again:

There was a couple of exciting days in Colon as a peaceful demonstration turned very violent. The demonstrator had nothing to do with the chaos which was brought on by no other than the hoodlum gangbangers in Colon taking advantage to loot whatever they could, including burning buildings down, shooting guns into the air, burning tires on the road, it was not safe to get near the town.
Every other Wednesday the marina hires a bus that takes us to Panama City for a day of shopping. On this Wednesday the company canceled the bus, don’t blame them not wanting to take any chances. The road that goes to Shelter Bay is not directly going through Colon so it was possible to drive to Panama City. Although the public bus service was canceled as these buses have no choice but drive to the bus terminal into the riot stricken City of Colon. 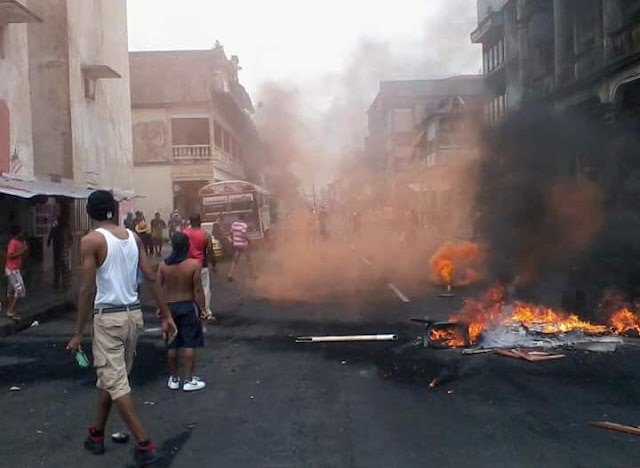 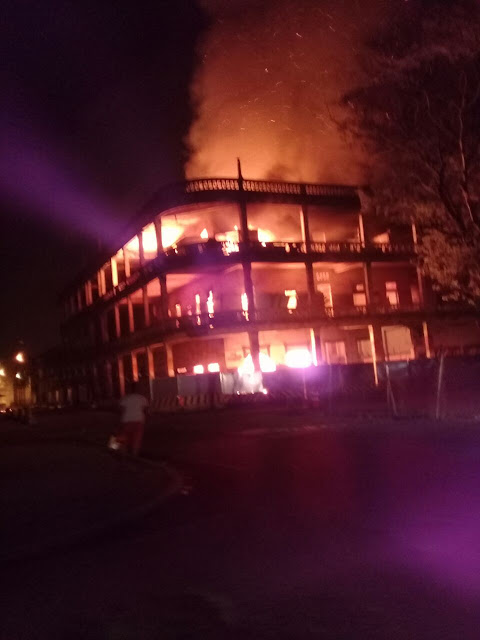 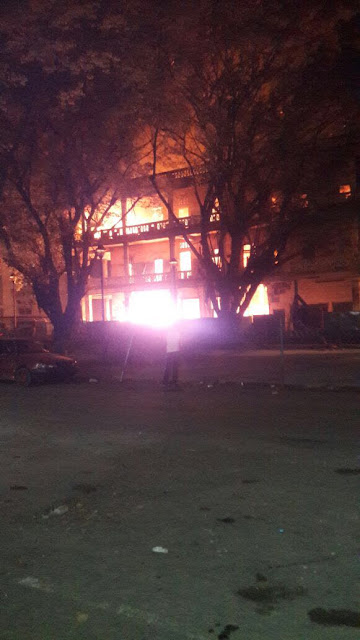 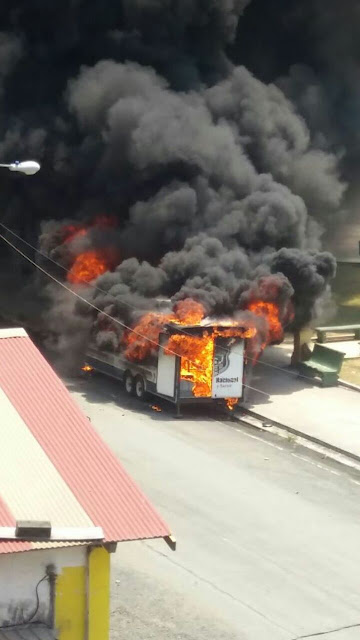 No we were not there to film it but all my friends who live there sent me the photos. It was not fun.

The Marina did organize another company to get us to Panama City. We didn’t realize it was another company but commented on the nicer seats. What usually happens is the bus lets us off at the Albrook Mall and stays in the parking lot all day so that we can return with our groceries and go shopping again. Carol and my routine is, since the mall is still closed, we take a taxi to the near Rey Grocery store, shop, return everything back to the bus then have fun at the mall. Well not that day. There was no bus at our return, I did have the driver’s number, he said he will be back in ½ hour. We tried to deposit our stuff at the 99 super market but they would not let us so I sent Carol shopping and I waited with all our groceries. To make a long story short I ended up sitting on the floor at 99 for 3 hours waiting for the frigging bus to return. It left me less than an hour to do my shopping thank you very much. At least Carol got all her shopping done. I was fuming but a bottle of cold bubbly on the way back made my day better.
My business is going somewhere else from now on. It was an annoying trip and I missed out on my shopping.

2 weeks after the riot another peaceful demonstration was underway which everybody feared Colon would break out again and the gangs told news stations they would loot every store that exists in Colon. Luckily that did not happen.

One day I was delivering a water hose to Carol as hers had just broken. As I walked by the volleyball net the marina teenagers were playing so I sat down for a moment watching. Bringing back fond memories of my teenage years, I loved to play volley ball. The kids invited me to play, told them no haven’t played in 40 years but then after watching a little longer I said why not after all they were one person short. OMG it was huge fun and it felt like I just played yesterday, I think I wore the kids out on my serves, they had a tough time. After about one and half hours of fun, as I returned the ball I felt a little click in my wrist and I knew I was done. It hurt for a little bit but then was OK but an hour later well I knew it was not good. I favored it for a week and did use a brace but after not getting better I did go into Panama City and had it X-rayed.
I broke the end tip of the ulna but did not need a cast just a brace, good thing. It wasn’t very painful but couldn’t do much with that hand, so Sid got stuck with the dishes for a while (he absolutely hates to do dishes). The funny things was my girlfriends were teasing that poor Sid will get dish washing hands, I responded “no I don’t think so but every time he does dishes he has tears in his eyes, I think he puts too much soap in the water”. Poor Sid did dishes for over 6 weeks, actually he may have gotten to like it as he is still doing it LOL, thank you Sid, love you Sid. (those days a loooong gone now).

I was able to play the guitar the stroking was fine but the rotating my wrist no way. 7 weeks later the bone was healed and I started to do dishes again, well a few things that did not use a twisting motion. That open mike we had an incredible musician couple playing and we ended up dancing. Not naming my dance partner and no it was not Sid, grabbed me by the hand and twirled me around forgetting to let my hand go and twisted my wrist so badly, I had to go see the doctor again. TCFF tear which is an injury to the triangular fibrocartilage complex, found in the wrist, between the end of the ulna bone and the carpals. You can compare it with a meniscus injury of the knee, take 6 to 12 weeks to heal. So I went for over a week daily to therapy while getting ready for the Canal Transit. Just what I needed, but hey it was a fun evening, not as fun as playing volleyball.  "Don't worry shit happens"

The croc (maybe crocs) in the marina is getting braver and we can see him/her daily and is even posing for photos. Just the idea of jumping in the water to clean bottom or prop, eeeeeek. Didn’t bother Sid and no one has seen the croc while under their boats. 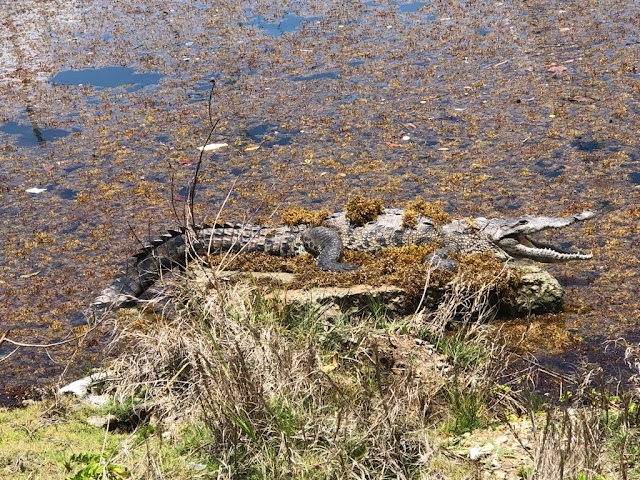 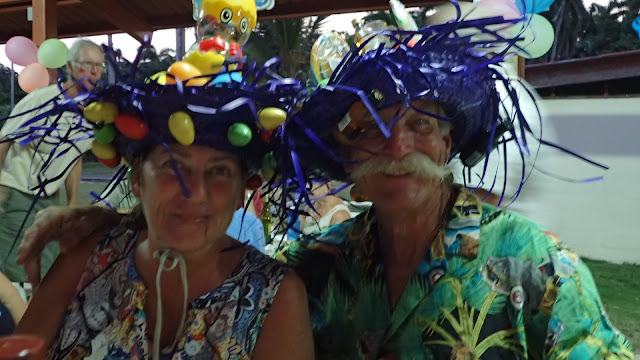 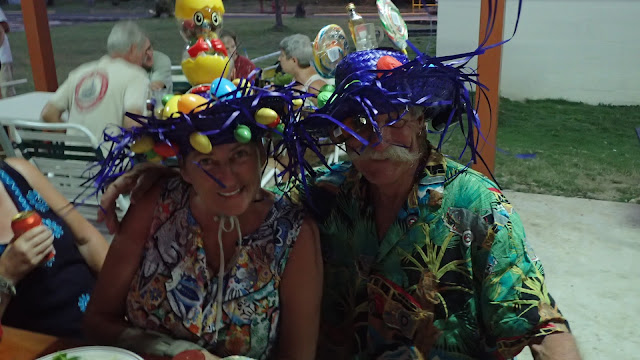 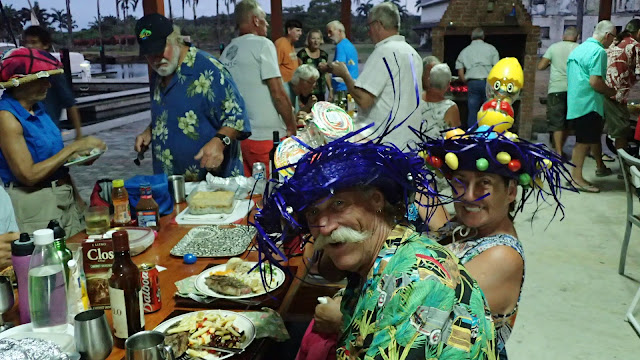 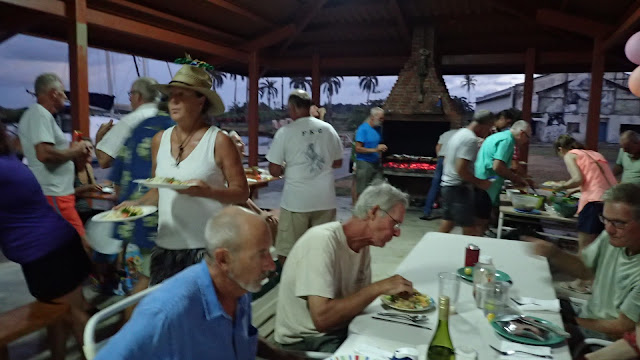 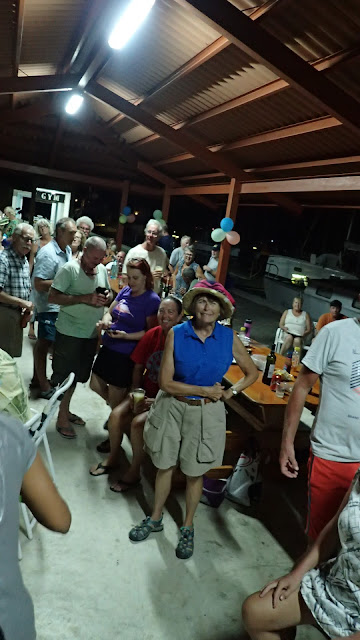 This is the time to head across the Pacific and so one buddy boat after another left the marina to transit across to the Pacific. Sid did a lot of line handling. He loves to do that and he enjoyed each one of them. Although in 3 transits 2 had some issues but I will get into this with the issues we had on our transit.

It was sad to see everybody go and the marina turning quiet. We were pretty much the last of our great group, all long term in the marina, to leave. Will miss this place but looking forward to new adventures.

Sid was very busy getting the boat ready for the transit, maintenance, repairs, doing dishes etc. Thank you Sid and so sorry I could not help.

That’s it for now, I found a program finally so let me work on our Transit films. I promise it will be soon.
Hugs and kisses to you all 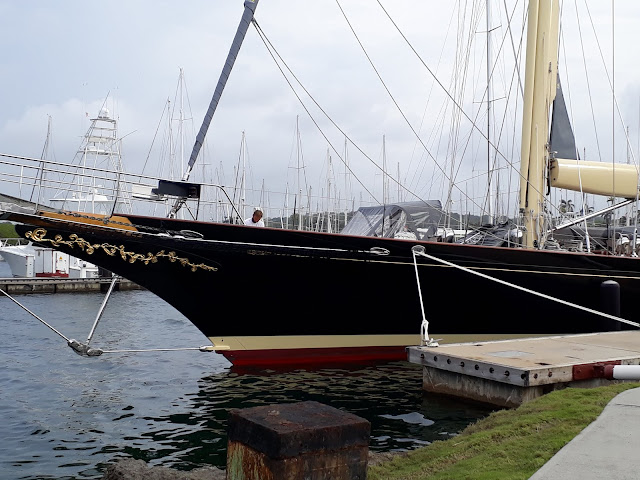 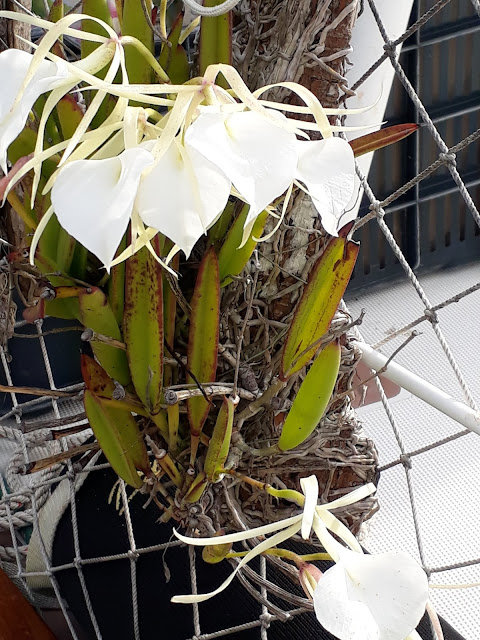 Where in the World are they? 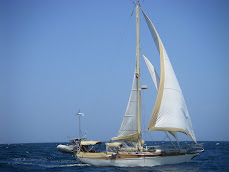